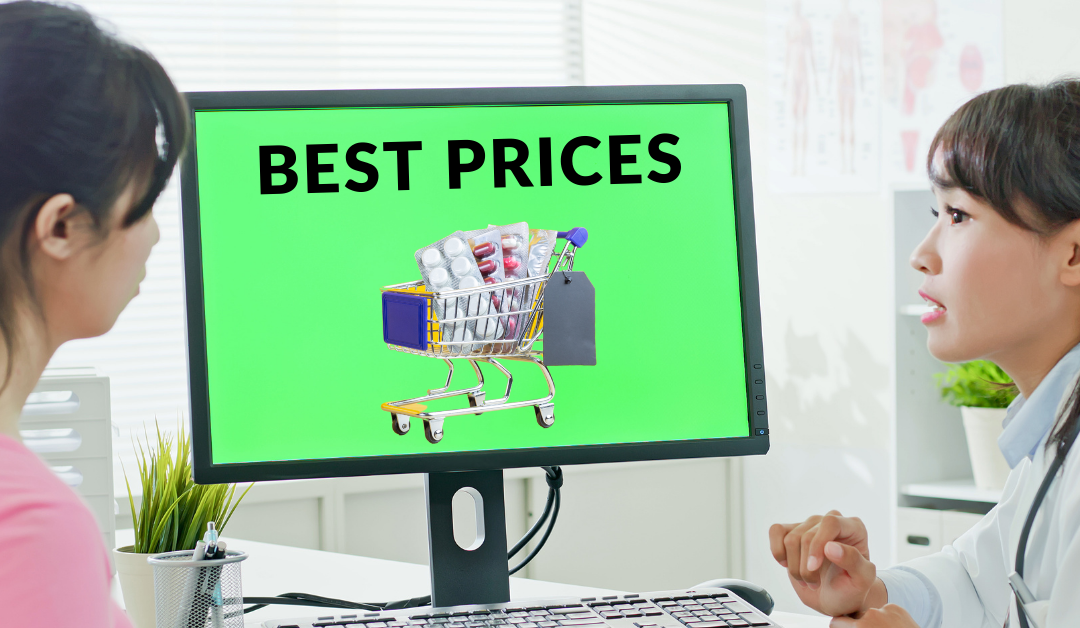 Earlier this year, I enjoyed a terrific call with a leader at GoodRx. There is so much to love about this company, its purpose, and the way that it is structured. Here are some financials/margins from FY 2020 – reported in Q4:

Smart strategy, a consumer-friendly model, plus an online user experience that is well-structured in a market that sizes up at over $500B per year. All combined around positively impacting a significant challenge which impacts Americans financially, emotionally, and physically with their care and health.

However, there is more meat on this bone – a LOT more. Candidly, GoodRx is just the tip of the iceberg in the space for many companies to cater to real-time, lowest price drug pricing. PBMs will recognize and soon realize the power of the stick they carry.

In my research of the organization, I found the existence of new, fertile ground for a prominent shift into greater growth and breaking new norms. I felt compelled to share thoughts around a meaningful itch in bad need of significant scratching.

GoodRx and its competitors such as @Blink Health are consumer-facing companies offering price-competitive marketplace services for outpatient prescription drugs. They carry a special type of ‘piggy-back’ business relationship with many of the nation’s pharmacy benefit managers (PBMs).

Let’s be clear – many people do not like PBMs for a variety of reasons. However, they have been around since in some form since the 1960’s, and we can count on them staying in place. These companies, such as Caremark, Express Script, and OptumRx exist in the middle of the pharmaceutical supply chain. Nestled right in between many health payers, drug manufacturers, and retail pharmacies across America.

PBMs smartly derive their income through multiple revenue streams and relationships as shown in the illustration above. Above all, these streams get financially stronger for these organizations as the number of filled drug prescriptions rise. PBMs operate primarily in a B2B space, interacting with health plans, pharmacies, and drug manufacturers.

GoodRx is a company who saw a tremendous opportunity made available through major coverage ‘gaps’ in today’s healthcare system. Applicable to millions of healthcare consumer clients that PBMs are not set up to serve; and where such consumers/patients spend their own dollars due to needed meds that:

Co-CEO Doug Hirsch positions GoodRx as filling a public need as a ‘marketplace’, rather than a pharmacy (1). The company and its customers are given preferential access to the lowest pricing of prescription pharmaceuticals that PBMs negotiated with retail pharmacies across America.

Through its online marketplace and ranking as the #1 most downloaded healthcare application, GoodRx effectively drives greater prescription drug transactions through a B2C model. This adds volume and revenue – both for itself as well as its PBM partners.

Having “take rates” of up to 15% per online customer transaction, GoodRx and companies in the PBM extended consumer space have gross margins that are many multiples higher than wholesalers such as McKesson. This is one of the reasons that GoodRx went public last September with its $388 million in 2019 revenue, and a whopping $139 million in operating profit (2).

All this said, the biggest issue GoodRx and companies like it have right now is with gaining greater public awareness and use. I’ve been a GoodRx user for years, and I can’t count the number of times that while standing in the local Costco pharma line, I opened my mouth to other people.

Honestly, it’s empowering to watch their faces light up. The blend of understanding, appreciation, and user experience in the app – all reaching them before they hit the register. There have been times after they see the real cost savings, which can be significant, that their faces light up.

When is the last time you saw people getting giddy in the pharmaceutical line?

Sadly, many Americans assume that their Medicare and private plan payments are the only and best option they have. Though it doesn’t work for every drug, online PBM-partnered marketplaces simply have better pricing in many cases.

On the other side, retail pharmacies recognize this and typically ask for customer plan coverage as the norm in quoting price, filling prescriptions, and collecting payment. Additionally, they institute higher ‘usual-and-customary’ cash pricing for customers who are uninsured or ‘pharmaceutically’ underinsured, and don’t realize that such marketplaces exist.

HOW PROVIDERS HAVE BEEN INCLUDED

Right now, GoodRx offers healthcare providers the ability to put an eye-catching card tray on their countertop. In this effort, patients can become a GoodRx member without cost, and still gain the benefit. A paid membership allows for even greater financial savings.

GoodRx also offers provider care through its extended HeyDoctor telehealth platform. This creates a channel for direct quality patient care; and to be fair, it also feeds back into more people using their service to drive more volume of prescription fills and revenue.

There is also a page that GoodRx offers to other telehealth organizations; and it appears they are paid an affiliate referral fee from such outside companies. Though not confirmed, there may also be a return referral relationship, where these telehealth providers such as @Amwell, @Teladoc, and @MDLive refer patients back into GoodRx for payment.

If there is such a referring relationship, I hope GoodRx is paying well. Because with their margins, other telehealth companies and many non-PBM healthcare companies could and should consider forming their own branded PBM ‘piggyback’ partner marketplaces. It only serves to add income, extra prescription volume, and thus continue to benefit PBM players.

We know that GoodRx has a telehealth service as well as cards in provider offices. However, there’s a lot more meaning meat on this bone – and I recently suggested as much to their leadership. Namely, to push business development to and through all types of providers around the country in a more unique, effective, and scalable manner.

Pushing through their pricing data through doctor screen interfaces within real-time, point-of-care encounters with patients would include:

Medication non-adherence (MNA) is known as America’s ‘other’ drug problem. It leads to 125,000 preventable deaths each year, and about $300 billion in avoidable healthcare costs.

The numbers are staggering, as those dying from MNA are ten times higher than homicide and 30x greater for someone over the age of 50 (3).

In the United States, it is estimated that 20-30% of prescriptions are never filled. Even after they are filled, there is a 50% chance that the continued use of that medication will not be followed as prescribed, especially after the first six months (4).

A significant portion of the problem relates to affordability. Researchers at the National Bureau of Economic Research released a February 2021 report that was staggering. Noting even a relatively modest increase in drug costs ($10 per prescription) led to a 33% increase in mortality

“I never thought we would get a mortality effect of this size…We never thought people would be cutting back on life-saving drugs to this degree.”

When a company such as GoodRx can push real-time pricing information right to the screen of a doctor during their visit, it allows for these benefits:

Candidly, GoodRx is just the tip of the iceberg in the space for many companies to cater to real-time, lowest price drug pricing. PBMs will recognize and soon realize the power of the stick they carry.

Think of it like this…PBMs flourish off increased prescription transactions. Most ANY COMPANY involved in the patient care journey has the capability to connect with PBMs via contract, and then build an online platform.

The retail drug sector is contractually bound to PBMs, and they must honor the GoodRx coupon pricing. So why wouldn’t PBMs want to add on more ‘consumer extenders’? Just imagine Walmart, Target, or other mega consumer companies cutting deals with PBMs.

“Steve, they would be losing money on the pharma business.”

Do you think they’re rolling in the dough on that business segment anyway? It’s a loss-leader that drives brand, feet in stores, additional revenue, and many other positives. So set up a carve-out corporate entity that helps them offset losses.

Remember that GoodRx gets up to 15% per transaction. What do you think mega stores that have the potential to leverage and carry far more people and prescription-fill transactions can negotiate with PBMs?

What about all the grocery stores, McDonald’s, Costco, and Dollar General. How about mobile companies that want to be more ‘caring’ to their customer’s health and dollars?

Get the point? Consumerism is just starting to grow throughout healthcare, and many companies want to, and now can get a significant foothold into healthcare journeys and experiences – without carrying healthcare data.

Our healthcare system is running up against a significant affordability crisis. It’s impacting health coverage, care services, and prescription drugs. People of all ages are not only mismanaging their healthcare, but rates of re-hospitalization and death are rising due to medical nonadherence.

GoodRx and other consumer-facing prescription marketplaces fill a significant void created by painful financial gaps in prescription affordability felt by many patients taking on greater levels of cost-sharing. However, there continues to be a large-scale lack of awareness and strengthening of patient education around best-price options for many outpatient medications.

A data connection between PBM-related marketplaces and providers provides real-time availability and assistance to patients at the critical point-of-care moment. Availability and growth of such arrangements serves to benefit patients, providers, self-insured employers, as well as PBMs and consumer marketplace services.

Dr. Steve Ambrose is a healthcare strategist with 28 years in clinical, technology, patient engagement, and consumerism. Dr. Ambrose may be reached through contact information on his LinkedIn profile.